Smart phone control of your Underfloor Heating and beyond!

Homes are becoming more advanced, more efficient and smarter. The days of controlling a new heating system by a basic dial thermostat really are behind us.

The majority of heating systems now have a digital programmable thermostat (or thermostats for multi-zone systems) that can control heating at different temperatures and times for each zone. They are more accurate than a dial thermostat and have much more than on/off.

Smart phone/app enabled controls take this further. By having controls that are compatible to use from a smart phone, tablet or computer enables better more efficient use of the heating and therefore saves money! How many times have you left your heating on because you were in a rush to get to work etc? Smart phone controls enable you to adjust/turn on/off the heating from anywhere you have 3G, 4G or WiFi.

In addition, most of the controls apps have charts or graphs so you can see when and where the heating is being used the most to enable you to obtain further efficiency.

At UFH1, we use Heatmiser Neo for our smart phone control offering.

This system has the following features and benefits: 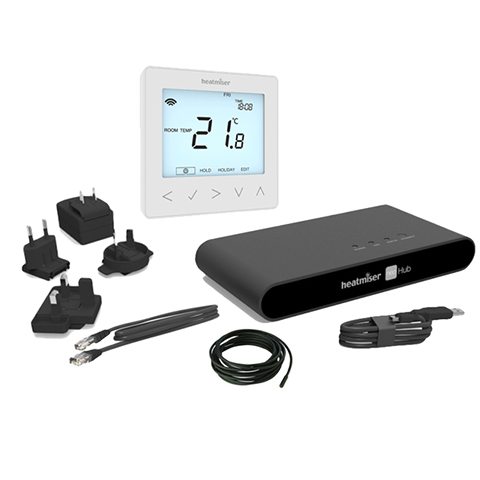 With so many offerings in the range, a good example of the flexibility and cost effective expansion of the controls system came about on a recent retrofit UFH project;

The customer retrofitted a low profile wet UFH system to the ground floor of a property built in 2012 that previously had radiators to both ground and first floors. To save re-wiring, the customer used Neo Air for the four zones of underfloor heating replacing the one radiator zone. Upstairs in the home a 230v Neo was used to control the radiators, replacing the dated thermostat/programmer.

The en-suite and bathroom had new Warm Mat Pro electric UFH mats fitted and these were linked to the Neo-e thermostats which are specifically for electric UFH (high current loading). The heating system in the property uses a hot water cylinder with timer so a Neo-HW (timer only) was used. The Neo thermostats can also be re-configured to be a timer only, ideal for use with towel rails etc.

A Neo Plug was used to control a table light – more often in Autumn/Winter for the customers’ dog!

The customer has one app with all nine options on, enabling them to control the full heating system, hot water system and some lighting from their smart phone.

The cost effective element comes in from being able to add single or multiple thermostats/timers on to an existing Neo system. Heatmiser Neo uses a NeoHub (router) connected via an ethernet cable to the broadband router so if you wish to add on controls, there’s no need to buy expensive packages over an over like most other systems on the market.

For example, if you had Neo and wanted to add an extra thermostat for extra zoning, electric UFH etc then the cost would be from £57+vat and it’s simply added to the Hub/app.