The use of aluminium ‘spreader plates’ is common in installing water underfloor heating to joisted floors.

There are pros and cons of the use of spreader plates that should be considered for water underfloor heating:

Pros
1.    Easy to install for the novice installer as they set the pipe spacing
2.    Lightweight – where biscuit mix can’t be used
3.    Clean installation – less mess than biscuit mix
4.    Quicker – generally faster to install than biscuit mix
5.    Spread the heat evenly when used with insulation alone

Cons
1.    Noise - as the expand and contract noises are sometimes experienced
2.    Cost – They’re around £12m2
3.    Thermal mass – they don’t create thermal mass like biscuit mix does
4.    Heat pump use – they’re not suitable for allowing a heat pump to run at 35 degrees, the flow temperature must be raised to 55 degrees minimum (see table)
5.    Pipe spacing – they generally only accept 200mm pipe spacing
6.    Joist spacing – in older properties where joists aren’t uniform, they have to be modified or different sizes purchased

We don’t advocate the use of spreader plates for water underfloor heating when the heat source is an Air or Ground Source Heat Pump.

The reason for this is because heat pumps are designed to run at a very low average flow temperature of 35°C for efficiency. In our experience even houses being built to current building regulations require 40W/M² and looking at the table, even with a floor covering of tiles, the heat output would be 28W/M² - therefore the only way of using spreader plates is increase the flow temperature to 45+°C, compromising efficiency.

If using carpet, the flow temperature would have to be 55°C, which has a large impact on the CoP (Co-efficient of Performance i.e efficiency) of the machine. In these cases, we recommend discussions with your heat pump supplier.

There are situations where a ‘biscuit mix’ can’t be used such as old buildings and/or where the joists aren’t strong enough and lightweight materials that give thermal mass such as vermiculite can be considered. 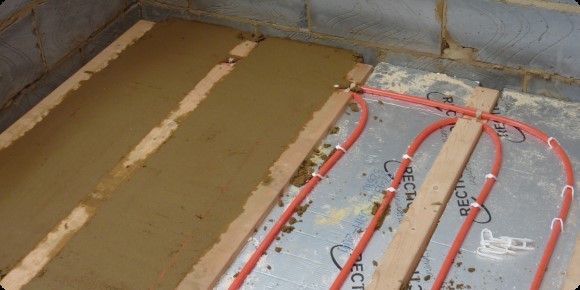